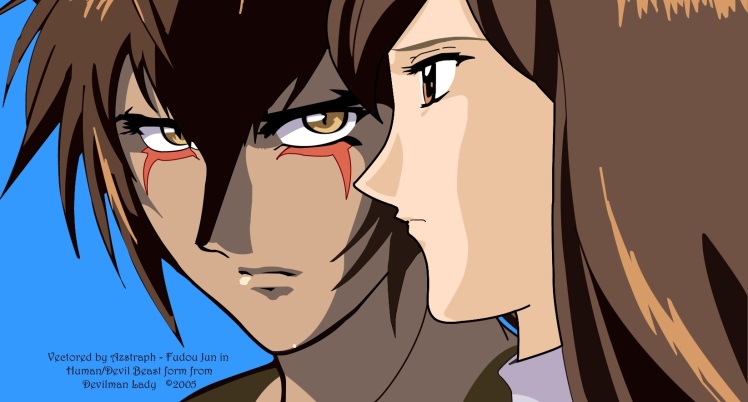 Fudo Jun is a beautiful supermodel who is idolized by many. She also has a dark secret that not even she knows about at first, for within her veins run the genes that hold the next step in the evolution of mankind. The same blood as the beastlike superhumans that terrorize the city. Unlike the rest of them, though, Jun has managed to hold a tenuous grip onto her humanity, and she is recruited by the mysterious Asuka Ran, member of a secret organization within the government, aimed at controlling, if not eliminating, these berserk destroyers of mankind. Jun, as Devilman Lady, must now exterminate her own kind, but how much longer can she keep her sanity in a situation she never chose in the first place? (Source: ANN)

I know that this is an old anime, but I just watched it last month. I read part of its manga as well. The anime is different from the manga, it’s like an alternative version. I really liked that fact, for so many reasons that I won’t mention. :p
I have to warn you first, that there is nudity in the anime and mature content “story wise”. So, at first the main character seems strong, yet the human side of her seems fragile. The art of the anime was great. Also, the main character’s beauty showed, and a lot of girls fell for her. Which is basically why its themed yuri. There was a lot of action and bloodshed in the anime. Oh, and the opening theme song of song of the anime was amazing I could listen to that song all day!! There was something I didn’t quite understand in the anime… Jun “the main character” seemed to walk around and kiss guys for no reason… I mean a guy appears out of nowhere she would share a kiss with him, and then you never see that guy again… What’s up with that?! Other than that the story was solid. So, good story, good sound track, good art, and it’s a very good anime.