In the peaceful theocracy of Simulicram, everyone is born female. At age 19, each maiden undergoes a special ceremony where she chooses her sex. However, only Pairs of maiden priestesses can synchronize with the ancient flying ships known as Simoun needed to defend Simulicram. These Pairs refrain from undergoing the ceremony as long as they wish to keep piloting their Simoun.
Aer is recruited to be a Simoun pilot after a terrifying attack by an enemy nation decimates the squadron known as Chor Tempest. To earn her wings she needs to find her way into the heart of Neviril, Regina of Chor Tempest. But Neviril’s heart still belongs to her previous Pair, lost in the battle when she attempted a forbidden Simoun maneuver.(Source: Media Blasters) 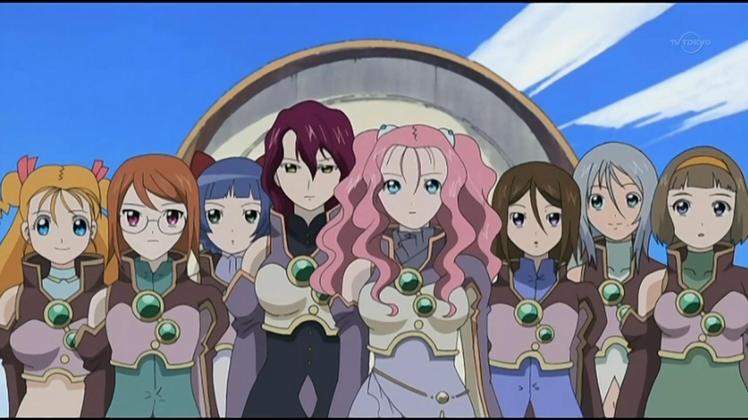 Simoun had a very unusual story. I cant call the anime Shoujo Ai or Yuri though. The characters in the anime are genderless and they can choose their gender once they are 18 I guess or something like that. So there are a lot of stuff about this anime that you need to consider when watching it. Like the Mecha, which I love there. The story had so much depth in it. I wasn’t expecting that. Also it addresses some serious issues which was very entertaining for me, In short, It exceeded my expectations in a very good way. I also loved the fact that I got to see every characters story they didn’t just focus one the two main characters. There was something about the ending that I didn’t quite like. It would be a major spoiler if I mention it so watch the anime and enjoy it. It has a pretty good story. The ending isn’t bad or anything like that. There was just something there that I didn’t like.