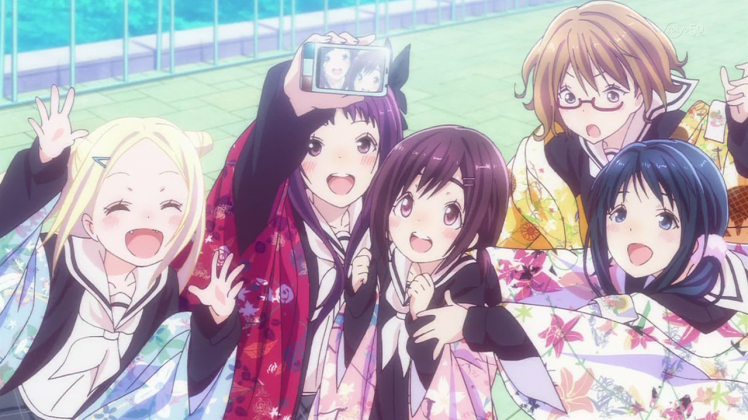 Normal appearance, normal intelligence, normal in arts and sports… just normal. This is the entirely normal 14-year-old, Naru Sekiya. While she admires “Heroines” she continues to live a normal life until one moonlit night she meets a fairy. This foreign girl then guides her into the extraordinary world of the yosakoi dance. (Source: Manga Time Kirara)

I’m a MOE anime fan… always have been. Hanayamata took MOE to the next level. I mean I’ve seen a lot of cute anime. Hanayamata is beyond cute. The anime is about Hana an American girl that is fascinated by the Japanese culture specially Yosakoi. So the anime is basically about friendship and forming a Yosakoi team. This is one of few anime that left a smile on my face even when it ended. I think its a great anime because I like moe.

As a non-moe fan and a normal viewer. The anime is pretty nice as face a PG-13 stories go. It wasn’t shallow but it was a little cliche… It wasn’t the best moe anime out there but it is the cutest. You can totally predict the outcome of the anime if your paying attention. Nonetheless if you at least like a music/dance anime. I believe you should watch it. It’s very entertaining musically.

Technicality wise, the anime had an amazing soundtrack. The art of the anime was really great… one of the best moe art I’ve seen. As for the voice actresses I believe they did a great job in choosing them both in singing and acting. Last but not least storyline: I believe that the plot was good not great just good and it did convey the messing that the creators were conveying perfectly.