You may have heard of kung fu, but the girls at Oarai High School practice gun-fu—really, really BIG 75mm gun-fu, in fact. It’s called Sensha-do, and it’s the martial art of operating armored tanks! They take it seriously too, and since winning the national Sensha-do championship is such a huge deal at Oarai, they sometimes go to extreme ends in order to get the best students from Panzer class to sign up. Which is how Miho Nishizumi, who HATES operating tanks, gets drafted to join doomsday-driven driver Mako, even-triggered gunner Hana, highly receptive radio operator Saori and combustible tank-fangirl and loader Yukari as the incomparable Anko Team. They may not be on the half-track to fame and fortune, and maybe a few of them would rather shop for tank tops than become tops in tanks, but once their focus is locked and loaded, they’re absolutely driven. (Source: Sentai Filmworks) 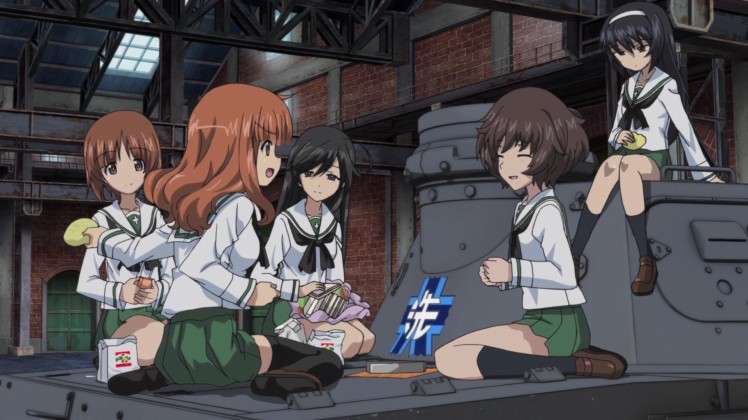 Girls Und Panzer is one of those anime that I regret not watching sooner. The anime is about tanks and military… about the girls too. Though how shall I put it…. this anime makes you fall in love with tanks. The military tactics in the anime were very cool, the Moe is a huge bonus. The storyline is solid. The anime was just right. there was nothing too much or too less about it. The team energy that the girls had was amazing. I also dig the anime setting that they were actually living on a huge ship. I was both surprised and thrilled about it. The art of the anime is breathtaking and the music is pretty nice.

Some of the tactics that they pulled in the anime surprised me. I did not expect it. I highly recommend the anime. Its one of the top school anime I’ve seen.