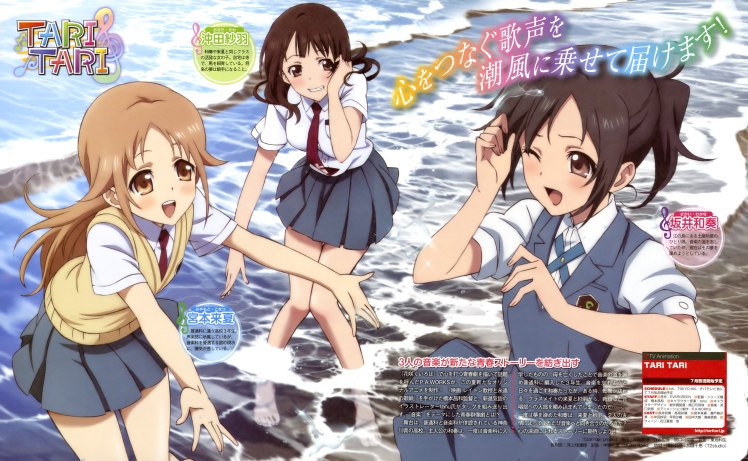 The last year of high school is always a time of both looking forward and looking back. Before you lies the future, alternately bright and scary. Behind you lie memories, both happy and sad. And somehow, in the course of one year, you have to reconcile those two and decide where your life is going to go.

For Wakana Sakai, who had started studying music, it’s time to face the tragedy that made her abandon that path. For Sawa Okita, it’s about her dreams of riding professionally. And for Konatsu Miyamoto, it’s about bringing her friends together through the magic of a song. Can something as simple as the formation of a choir club really help solve the hurts and pangs that come with growing up? Can music bring people together despite their differences? (Source: Sentai Filmworks)

I so regret not watching this anime sooner. This is one of the most amazing Slice of Life anime I’ve ever same across. Tari Tari is about Wakana Sakai, and a group of classmates that later become her friends. Each character has his/her own struggle to deal with. Wakana recently lost her mother which caused her to stop playing piano even though shes very good at it and her mother was a well known compose. Sawa on the other hand is aiming to become a Jock but is struggle because of her height and her father’s lack of understanding. Konatsu wants to sing but has a stage fright. Taichi wants to become a professional badminton player but the school doesn’t have a badminton and the sport has little support. Atsuhiro got stuck with them due to the fact that he doesn’t understand Japanese well.

The anime has major character development for each and everyone of the character even minor character grew throughout the anime. The anime never failed to impress me. The way the story is told was really great. The animation is quite beautiful and the music is awesome. I highly recommend this anime. You’re missing a lot if you haven’t seen Tari Tari yet.