True Calendar (T.C.) 71—a new age where 70% of the human population lives in space thanks to the development of “Dyson Sphere”, a city in space.

The world is divided into two main powers: The Dorssia Military Pact Federation, a power which grew out of a military alliance, and the Atlantic Rim United States (ARUS), which grew in power as it expanded its trade agreements. The minor nation of JIOR has declared neutrality between these two forces and maintains its peace through economic prosperity.

Within the JIOR’s Sphere, Haruto Tokishima lived an ordinary life as a high school student in the division known as “Module 77″—until the Dorssian military begins their sudden invasion!

But the whole world will be shaken when Haruto meets the mysterious humanoid weapon, Valvrave! (Source: Aniplex USA) 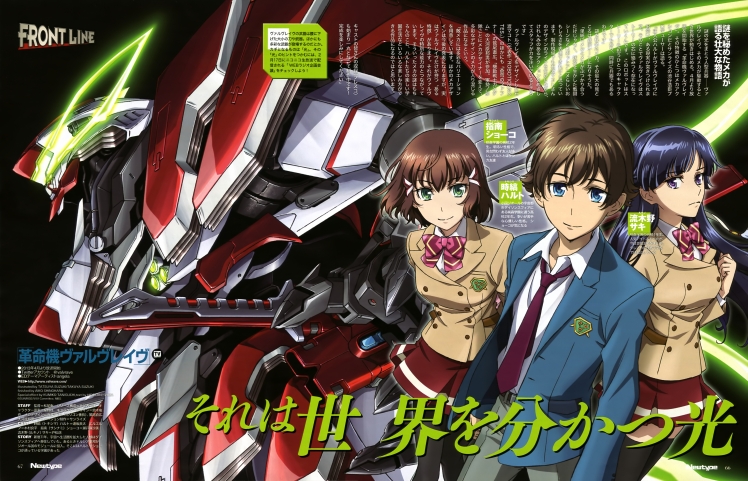 Kakumeiki Valvrave is one of the best and worst mecha I’ve ever seen. The best because it of the mecha Valvrave are the coolest mecha I’ve ever seen. Each one of the five Valvrave has its own unique feature. That’s crucial to the story because the anime is actually about a revelation that those students started. That revelation is for them to gain their freedom and for make peace with other races. Each person in that in Module 77 had their own agenda of why they were doing this. The most interesting part there was the antagonist, they actually believed they were the good guys and they all grew so much through out the anime. Surprisingly enough the protagonist were the bad guys in a way… they are not the bad guys but in a way. I don’t want to spoil anything. I also loved the fact that the story was kinda told as a tail.

The worst anime because it kept me on edge though out the whole 24 episodes and by the end of every episode I be like “Grrrrr”. The anime had also lots of betrayals and failures to a point where I actually lost faith in the protagonists. To top it of it was so sad that I cried a lot during the anime… even after the episode ended.