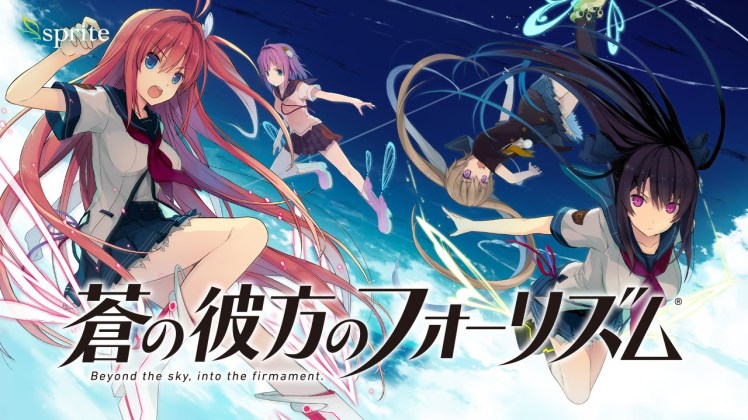 Ao no Kanata no Four Rhythm is set in a world where people can take to the skies, soaring above land and sea. An area called the Four Islands Archipelago has a technology called Grav-Shoes, which allow the wearer to fly. Aside from simple transportation, people also use these shoes in a competition called FC (Flying Circus). To score points, they either touch buoys floating above the ocean, or their opponent’s backs.

The energetic but ditzy Asuka Kurashina transfers to Kunahama Academy, a high school in the Four Islands Archipelago, from the outside world. She joins Misaki Tobisawa and Masaya Hinata’s second year class. Her lack of experience and general clumsiness make her classmates worry if she can learn to fly properly, but she quickly develops an interest in FC, and she, Misaki, and Mashiro, a freshman, join the school’s tiny FC club. But Masaya seems reluctant for some reason, even though he seems to know a lot about the sport.

The most interesting thing about Ao no Kanata no Four Rhythm for me was the sport itself. The anime is made by Gonzo Studio. Gonzo worked on anime such as Special A and Strike Witches along with lost of famous action titles like Hellsing and Gantz. The anime is very moe, it has some yuri sebtext as well. It was more of a sports anime than a moe, because they focused alot on explaining the game and it was about team work and doing your best to win even if the opponent was stronger than you. It was generally good but there was nothing special about the anime. I think it was made to promote the VN or for the VN fans. Either way The anime was just okay.