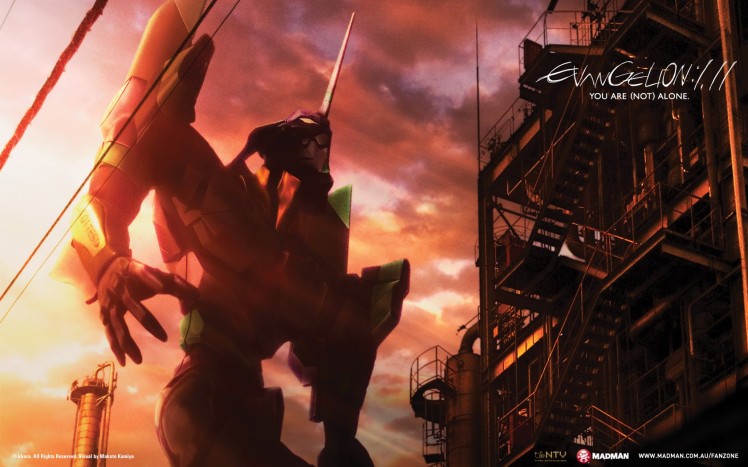 After the second impact, all that remains of Japan is Tokyo-3, a city that’s being attacked by giant creatures that seek to eradicate the human kind, called Angels. After not seeing his father for more than eight years, Shinji Ikari receives a phone call in which he is told to urgently come to the NERV Headquarters, an organization that deals with the destruction of the Angels through the use of giant mechs called Evas. Shinji’s objective is to pilot the Eva Unit 01 while teaming up with the Eva Unit 00 pilot, Ayanami Rei.

In 2007, the film was awarded the DCAJ Chairperson Award during the 22nd Digital Contents Grand Prix. In 2008, the film won the Tokyo International Anime Fair award for anime of the year (with Hideaki Anno receiving the best director award for it), the Toukaimura Genpachi Award at the 7th Annual Japanese Otaku Awards and the Theatrical Film Award at the 13th Animation Kobe Awards.

I know I’m very late for the gig and very late for the review, but hey I made it. Evangelion 1.0 is a good movie. Shin however was super annoying. Its safe to say that Shin is the most annoying main character in anime history. I’m not exaggerating. Other than that the movie was great. I specially liked EVA 01. Its a good mobile suit. I don’t understand why they had to relay on someone like Shin and I don’t think I ever well.

The movie was just an introduction to all things Evangelion and to NERV. It was enjoyable but it didnt explain peoples obsession with Evangelion. Also Asuka and Mari weren’t introduced in that movie which saddened me. I wanted to see Asuka in action. The soundtrack and animation were superb.