Similar to the previous season, The Walking Dead: Season Two is a point-and-click adventure game. The player, in control of Clementine, can direct the character around the environment, examine and interact with various scenery elements and collect and use objects to advance the story. The player can also initiate conversations with non-player characters via conversation trees. Certain replies from other characters may offer the player multiple choices to select from, including the option to stay silent, with a limited amount of time to make the selection; if the player does not select an option, the conversation will continue as if they had stayed quiet. Such choices can affect how the other characters will later react to Clementine which can influence later events in the story. Other scenes are more action-oriented, requiring the player to complete quick time events to prevent Clementine or her allies from getting killed. If the player fails at these events, the game will restart at the start of the scene. Such action scenes may also require the player to make a key decision within a limited time frame, such as which of two characters to save from attacking walkers.

The player’s choices and actions will impact story elements in later episodes; for example, a character that the player does not choose to save will not appear in later scenes. Season Two also incorporates the player’s choices from the first season and the DLC 400 Days, via the saved game file from these games, to influence the story and events in these episodes. 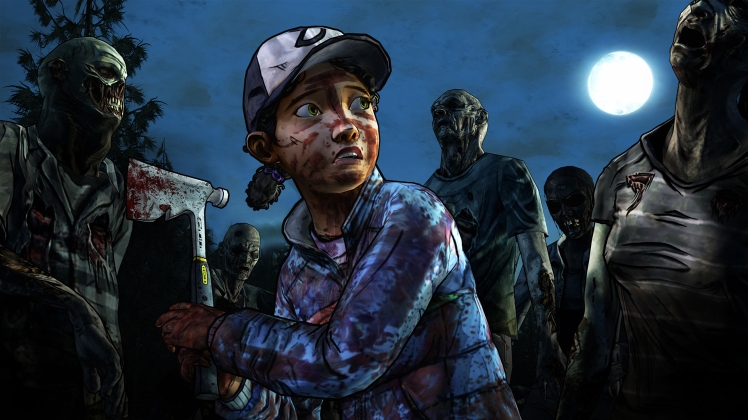 The Walking Dead season two takes place after the events of The Walking Dead season 1 Telltale game. In this season will be able to play as Clementine. Since the character is young you can see the difference between playing as her and playing as Lee. This season is just as depressing as the first one. Its more gruesome as well in my opinion. The plot is interesting but tragic.

The art and animation improved a great deal from the first game. You will defiantly get attached to the characters. Specially Clementine and I bet that everyone got attached to her from the first season. Its one of those games that made me want to drop everything tragic because its just that sad.

It is a good game if you played season one you must follow through with this.