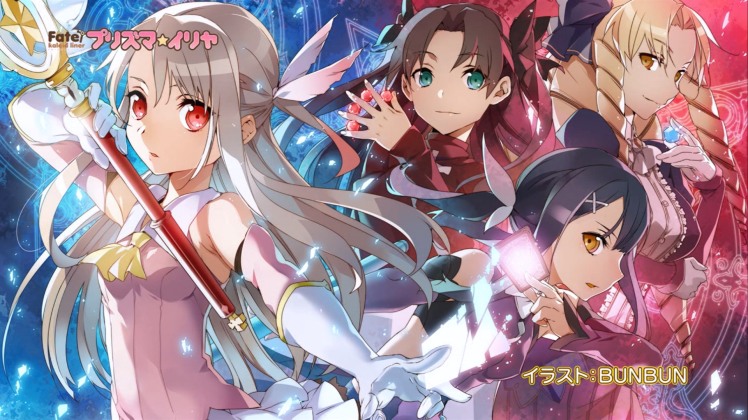 Spin-off of Fate/stay night with Illyasviel von Einzbern as the protagonist, living an alternate life as a school girl. While taking a bath, she stumbles upon Kaleido Stick Ruby, who turns her into a magical girl.

Fate/kaleid liner Prisma☆Illya 2wei! – The magical girls are back, and ready for another round of adventure! After successfully recovering the Class Cards, eighth graders-turned magical girls Illya and Miyu think they can finally take it easy. But as fate would have it, the girls are once again called back into active duty when they find out that the Cards have left some very nasty side effects on their world. However, their seemingly easy mission goes totally awry with the appearance of a dark stranger who looks just like Illya! Who is this new but familiar face, where did she come from, and what does she want from Illya? With the arrival of this new foe, it seems like Illya’s finally met her match when her everyday life takes one dark turn! (Source: Crunchyroll) 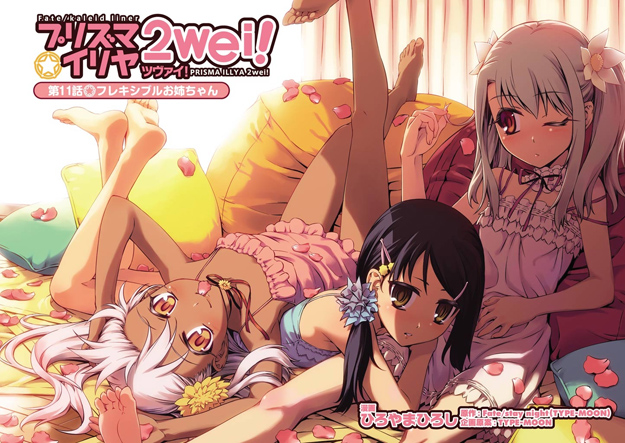 I’m a huge fate/ fan so when I saw that this anime is from Fate series I decided to watch it. First thing I’ve noticed is that the anime is way lighter than Fate/stay night and Fate/zero. It does have its dark moments but it’s still light and girly. It’s still amazing, the coolest part was that it wasn’t only about summoning servants. I wanna say more about that… But I feel like it’s going to be a huge spoiler. Regardless of the fact that the anime is so moe, it has great deal of action and plot twist. Therefore give the anime sometime don’t judge it by the first two episodes. It is an amazing anime and I can’t wait for the 3rd season it’s been announced but the date wasn’t. I’ll post about it once I know more.