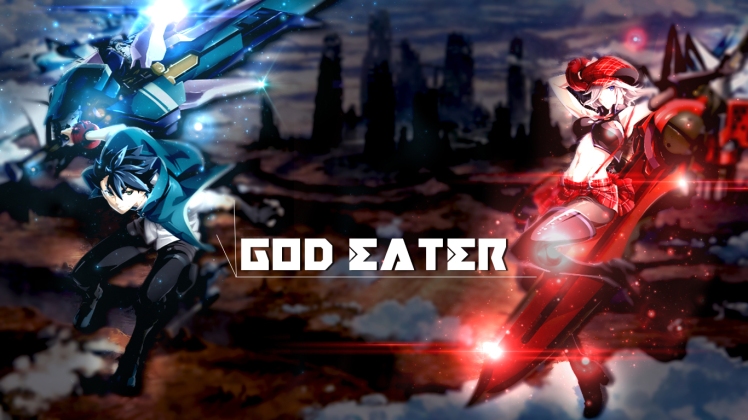 The year is 2071. Humanity has been pushed to the brink of extinction following the emergence of man-eating monsters called “Aragami” that boast an immunity to conventional weaponry. They ravaged the land, consuming almost everything in their path and leaving nothing in their wake. To combat them, an organization named Fenrir was formed as a last-ditch effort to save humanity through the use of “God Eaters”—special humans infused with Oracle cells, allowing them to wield the God Arc, the only known weapon capable of killing an Aragami. One such God Eater is Lenka Utsugi, a New-Type whose God Arc takes the form of both blade and gun.

Now, as one of Fenrir’s greatest weapons, Lenka must master his God Arc if he is to fulfill his desire of wiping out the Aragami once and for all. The monsters continue to be born en masse while the remnants of humanity struggle to survive the night. Only God Eaters stand between the Aragami and complete and total annihilation of the human race. [Written by MAL Rewrite]

I’m a huge god eater fan. The first I heard of God Eater was when I watched the OVA. I looked it up and I found a manga. I’ve read it and I was hooked. I’ve then learned about the games and got them I played the Japanese version on both psvita and ps4, and I’ve also got the English version for psp. I’m looking forward to god eater 2 rage burst localization.

God eater anime have amazing graphics, it looked 3D when it was actually 2D which is impressive. There were unfortunate delays in the episodes release dates which made us wait longer for the anime. A new character was introduced in the anime his name is Usagi Lenka, he’s supposed to be the protagonist like in the anime which is our character. Though… Lenka starts off well… kinda lame. Our character was way tougher. Lenka always makes himself the sacrifice which is kinda annoying. He does pick up his act later on in the anime.

The anime story wasn’t exactly like the game. There is a character that plays a huge role in the game and that character was only shown in the last episode of the anime or so. So even if you watched the anime and liked it. You must play the game. Also you’ll find out everything that happened after the last episode throughout the game. It was nice however how they tired to fit certain events in the anime. It was really cool. As far as god eater music goes. I’m in love with the soundtrack. I’m also love the opening of the anime itself.