A story based on the super popular song series from NND. Eruna Ichinomiya, a freshman who dreamed of a school life filled with cuteness, entered a boarding school—Mikagura Private School. In this school, each of the cultural club representatives have to battle each other, with unique powers…!! What will happen to Eruna, who somehow ended up becoming the representative of a certain club?! (Source: Batoto) 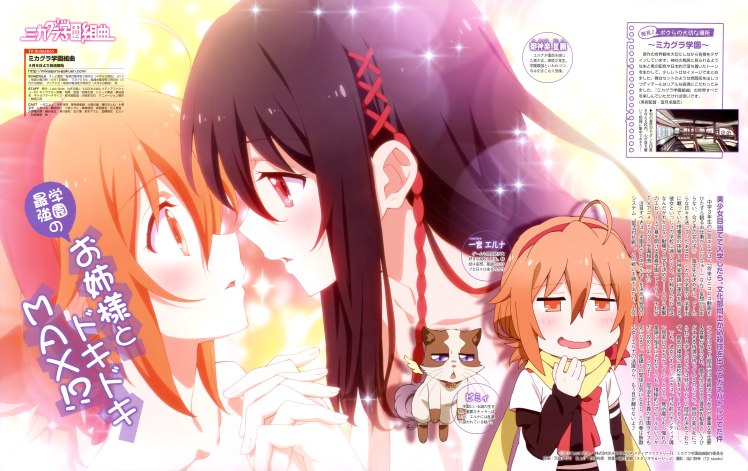 The story of the anime is about a a girl named Eruna who enrolled in Mikagura Gakuen because she took a liking in Mikagura Saisa (Who’s the girl in the picture above). Mikagura Gakuen is a club based high school so when a student enrolls they need to join a club to get some school privileges. The school holds a club battle every now and again and the winners of the battle get high states in the school and get better equipments, bigger rooms and so on. I instantly fell in love with the anime idea. Not to mention Eruna is the coolest female character I’ve seen so far. Its great and funny how shes into girls. She has a very awesome perspective to things. She also has this aura and energy that can influence everyone around her.

The other main character Saisa is shown to be very private and mysterious. There were also a number of interesting characters through out the show. The show never failed to make me laugh. Saisa’s character changed so much because of Eruna. I was interesting to learn more about her. The anime was very shounen the interesting type. I believe that everyone can enjoy this anime if they give it a try.